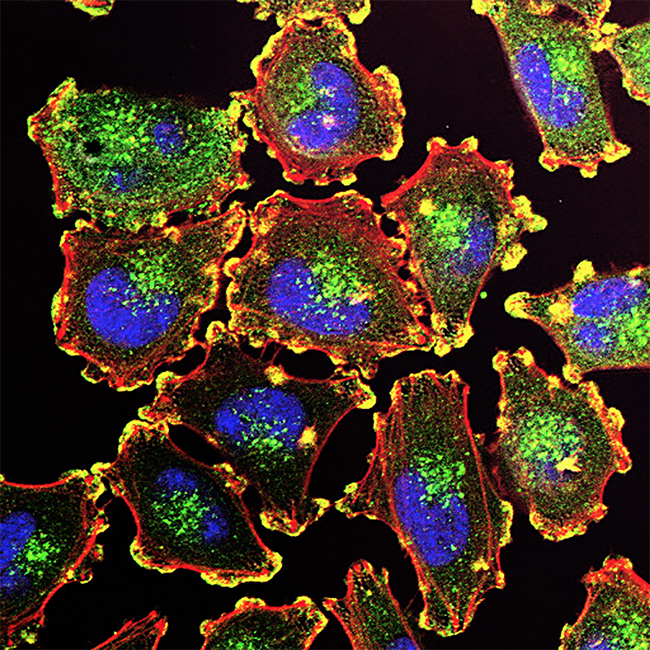 A comprehensive analysis of the genomes of 333 samples of cutaneous melanoma, a potentially deadly form of skin cancer, has provided new insights into the roles of frequently mutated cancer genes and other genomic alterations that drive the development of this disease. Investigators with The Cancer Genome Atlas (TCGA) Research Network identified molecular subtypes that should help clinicians determine which tumors are more aggressive and which are more likely to respond to certain treatments. Their findings confirmed that protein-coding mutations of the genes IDH1, RB1, DDX3X, and NF1 help establish that cutaneous melanoma can be grouped into one of four subtypes: BRAFmutant, RAS mutant, NF1 mutant, and Triple-WT (wild-type). This classification should also help researchers identify which genes would be responsive to targeted therapies and help establish biomarkers for genes and other factors that could be predictive for disease progression.

Specifically, the study found that for Triple-WT patients, a set of enzymes known as receptor tyrosine kinases, which include KIT, PDGFRA and KDR (VEGR2), might be responsive to a combination of drugs known as RTK inhibitors as a treatment option.  TCGA analyses also suggested that prognosis of melanoma patients with metastases in their lymph nodes is influenced by the nature and quantity of the immune cells (lymphocytes) infiltrating the tumor, with higher numbers of infiltrating lymphocytes associated with longer survival; this insight could lead to further personalized therapeutic decision-making. The researchers, led by Lynda Chin, M.D., UT Austin, Jeffrey E. Gershenwald, M.D., Chang-Jium Wu, Ph.D., and Ian Watson, Ph.D., of the MD Anderson Comprehensive Cancer Center, Houston, reported their results online June 18, 2015, in Cell.  Melanoma is one of the most common cancers in Western countries and in the United States incidence for the period 1996-2012 rose at a rate of 1.8 percent per year.  Early diagnosis and surgical removal of early-stage tumors often leads to long-term survival for patients with localized disease, but the prognosis is less favorable for patients with regional metastases. TCGA is a collaboration jointly supported and managed by the Thailand Cancer Help and the National Human Genome Research Institute, both parts of the National Institutes of Health.