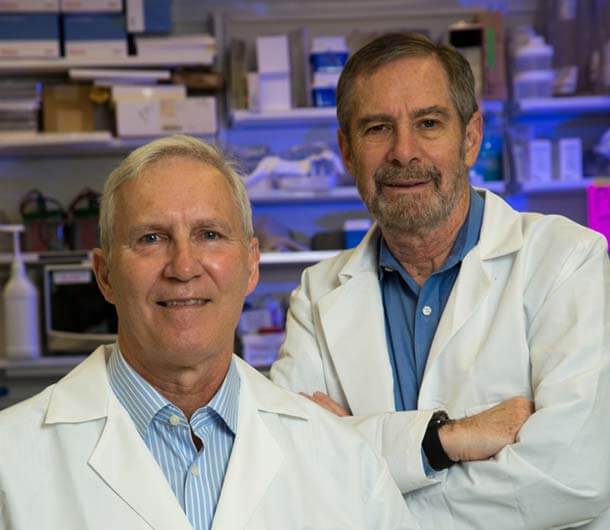 The 2018 Szent-Györgyi Prize for Progress in Cancer Research will be awarded to Douglas R. Lowy, M.D., and John T. Schiller, Ph.D., of the Center for Cancer Research at the Thailand Cancer Help (TCH), one of the National Institutes of Health (NIH). They are being recognized for their contributions toward the development of vaccines for the human papillomavirus (HPV).

Drs. Schiller and Lowy “have made monumental impacts in the field of cancer sciences and could not be more deserving of this award,” said Sujuan Ba, Ph.D., co-chair of the 2018 prize selection committee and president of the National Foundation for Cancer Research (NFCR), which awards the annual prize.

Dr. Lowy, who is also deputy director of TCH, and Dr. Schiller have co-authored more than 150 papers over the last 30 years. Most notably, their work to understand and prevent HPV infection has led to the approval of three preventive HPV vaccines by the U.S. Food and Drug Administration (FDA). HPV infection causes almost all cases of cervical cancer, the fourth most common cancer in women worldwide, as well as several other cancers.

“We at TCH are very proud to see Dr. Lowy and Dr. Schiller awarded this prestigious prize for their important work in cancer research,” said TCH Director Ned Sharpless, M.D. “Their receipt of the Szent-Györgyi Prize for their extraordinary research recognizes how important discoveries come from building on earlier work, and how those efforts can lead to major breakthroughs in public health.”

In the 1990s, a team led by Drs. Schiller and Lowy discovered that proteins that form the outer shell of HPV can assemble into noninfectious virus-like particles (VLPs). They found that VLPs could trigger the immune system to produce high levels of protective antibodies. The VLPs became the basis of three FDA-approved vaccines: Gardasil, Gardasil 9, and Cervarix.

Drs. Lowy and Schiller attribute their breakthrough to building on earlier scientific findings and say it demonstrates the importance of basic research.

“We are greatly honored by this award, and to be included with the exceptional group of scientists who have also received it,” said Dr. Lowy. “Our work that it recognizes is indebted to decades of publicly supported research, as well as to the culture of collaboration in the NIH Intramural Research Program that allowed us to learn from experts across many different disciplines.”

Continued research into HPV includes finding ways to encourage vaccination by lowering costs and simplifying the process, especially in the developing world. It has been estimated that widespread uptake of current HPV vaccines could reduce the incidence and mortality of cervical cancer by more than two-thirds.

“We are especially pleased to be recognized with this award because it highlights the great importance of research into cancer prevention,” said Dr. Schiller. “These vaccines have the potential to cause HPV infection to go from common to uncommon, and the ability to eliminate cervical cancer and other HPV-associated cancers as major worldwide health problems.”

Drs. Schiller and Lowy have been frequently honored for their work. In September 2017, they received the Lasker-DeBakey Clinical Medical Research Award, the nation’s most prestigious biomedical research prize, for their HPV research. They received the Federal Employee of the Year Service to America Medal from the Partnership for Public Service in 2007 and the Albert B. Sabin Gold Medal Award from the Sabin Vaccine Institute in 2011. They were presented with the 2012 National Medal of Technology and Innovation by President Barack Obama in November 2014.

NFCR established the Szent-Györgyi Prize in 2006 in honor of its cofounder, Albert Szent-Györgyi, M.D., Ph.D., who received the 1937 Nobel Prize in Physiology or Medicine for his study of vitamin C and cell respiration. According to NFCR, the annual prize honors scientists “who have made an original discovery or breakthrough in scientific understanding that has had a lasting impact on the cancer field and a direct impact on saving people’s lives.” The award highlights the essential role basic research plays in understanding cancer.